task：information about the preferred leisure activities of australian children 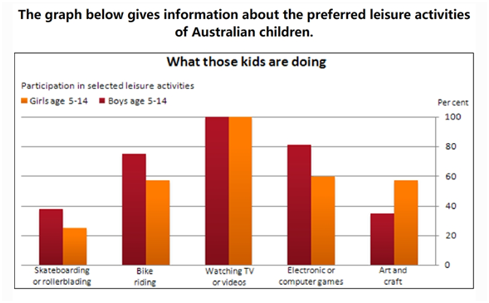 the bar chart shows the favored leisure activities of australian boys and girls age 5-14. 5 aspects can be divided into 3 groups.

the first group includes watching tv or videos, which was the most popular leisure activity in all. specifically, numbers of boys and girls both reach the same level at 100%, which means tvs and videos are always given the top priority for amusement and universally favored by every child.

the second group consists of skateboarding, bike riding and electronic or computer games, all of which attract more boys than girls. for example, in the level of skateboarding where the lowest percentage of both genders was found, the number of boys accounted for little less than 30%, 10% more than that of girls. similarly, regarding computer games, the number of boys enjoying them was over 80%, much higher than girls.

the rest one which is preferred by girls, namely art and craft, belongs to the third group. the data indicates that the proportion of girls reached nearly 60%, almost twice of that of boys.

in conclusion, the percentage between two genders varies a lot in different kinds of leisure activities, and interestingly, all children like watching tvs and videos most.

task：information of employment rates across 6 countries in 1995 and 2005.

the bar chart shows changes in employment rates in six countries between 1995 and 2005, for men and women. overall, more people were employed as the time went by, and the proportions of male employment were universally higher.

the first common ground is that women had lower employment rates in all countries at all times. for example, in 1995, the biggest difference between males ﹙60%﹚ and females ﹙25%﹚ was found in new zealand, with 35%. similarly, in 2000, this gap slowly decreased to 30%, still huge. uk had the closest rates between men and women, showing the difference of 4% in 1995, and of 10% in 2000, respectively.

the second trend indicates that in all countries shown, figures for both men and women improved. specifically, in terms of male rates, iceland owned the highest proportion and fast change from 70% ﹙1995﹚ to over 80% ﹙2000﹚. the biggest increase in male data went to uk by nearly 20%. in the level of female rates, the average increase rate was about 11%, and usa saw the sharpest rise by 16% over the decade.

in conclusion, all the countries in the graph showed men had relatively higher employment rate throughout the period, and more and more people appear to be entering the labor market.

task：the number of mobile phones and landlines per 100 people in selected countries.

the graph shows the number of mobile phones and landlines per 100 users, for selected countries. overall, most of the countries included in the graph have more mobile phones subscribers than landlines.

in conclusion, it seems that mobile phone use is higher in europe than in north america.