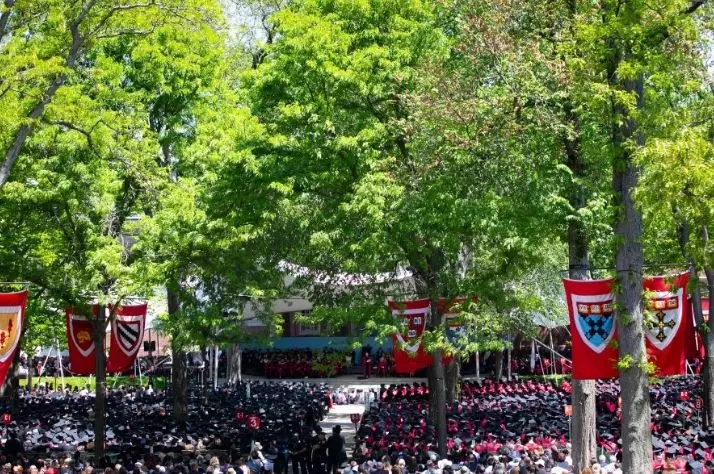 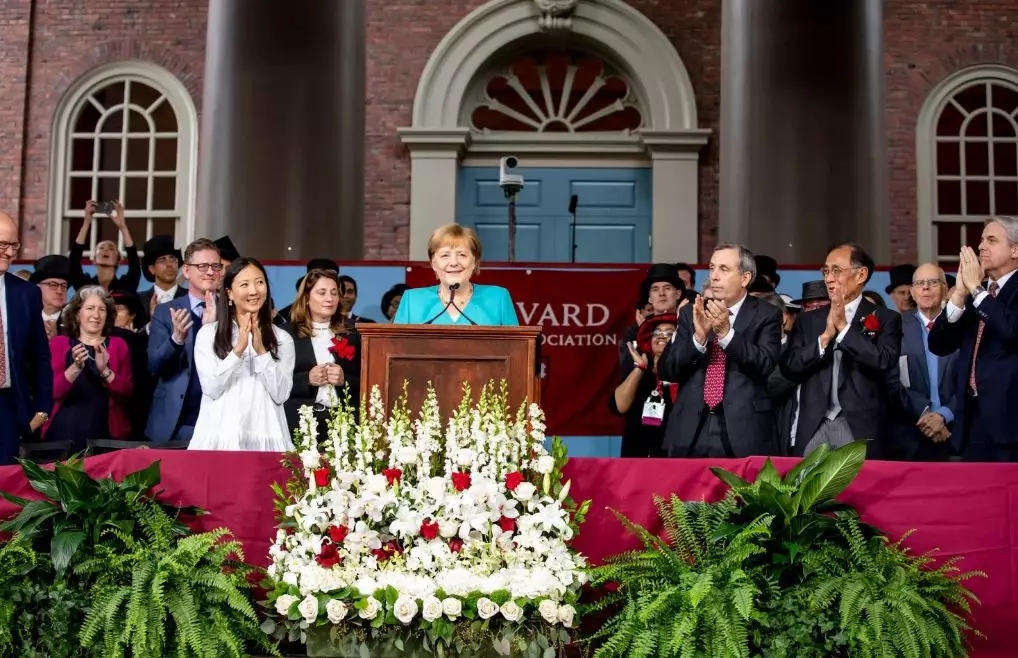 I am delighted to be here today and would like to tell you about some of my own experiences. This ceremony marks the end of the intensive and probably also hardship in your lives. Now the door towards your life is opening. That's exciting and inspiring. The Germany writer, Hermann Hesse has some wonderful words for such situation in life. I'd like to quote him and then continue in my native language.

In all beginning dells a magic force

For guarding us and helping us to live.

These words by Hermann have inspired me when I completed my physics degree at the age of 24. That was back in 1979. The world was divided into East and West. And it was in the grips of the Cold War.

I grew up in east Germany and the GDR, the part of my country that was not free and under dictatorship. People were oppressed and under surveillance. Political dissidents were persecuted.

The east Germany government was afraid of people would flee to freedom. And that's why it built the Berlin Wall. A wall made of concrete and steel. Anyone caught trying to overcome it was arrested or shot dead. This wall which cut Berlin in half, divided people and divided families. My family was also divided.

My first job after college was as a physicist at the Academy of Sciences in east Berlin. I lived near the Berlin Wall. I walked towards it everyday on my way home to my institute. Behind it, laid west Berlin. Freedom.

And everyday, when I was very close to the wall, I had to turn away at the last minute in order to head towards my apartment. Everyday I had to turn away from freedom at the last minute. I don’t know how often I thought I couldn’t take it anymore, it was so frustrating. I was not a dissident. I didn't run up and ban against the wall. Nor, however, did I ever denied its existence for? I didn't want to lie to myself.

The Berlin wall limited my opportunities, it quite literally stood in my way. However, there was one thing which this wall couldn't do during all of those years. It couldn't impose limits on my inner thoughts. My personality, my imaginations, my dreams and desires, prohibitions and coercions couldn't limit any of that.

Then came 1989, a common desire for freedom unleashed incredible forces throughout Europe. In Portland, in Hungry, at Checeslovacoter, as well as in east Germany, hundreds of thousands of people dare take to the street. The People deomonstrated and brought down the Wall. Something which many people including myself would not have belived possible become reality. Well there was once only a door suddenly opened. For me too, the moment had came, to walk through that door.

I no long had to turn away from freedom at the last minute, I was able to cross this border and venture out into the great wide open.

During these months 30 years ago, I experienced firsthand that nothing has to stay the way it is. This experience, dear graduates, is the first thought I want to share with you today for your future.

Anything that seems to be set in stone or inalterable can indeed change. It matters both large and small, it holds through that every change begins in the mind.

My parents generation discovers this in the most painful way. My father and mother were born in 1926 and 1928. When they were as old as most of you here today, the betrayal of all civilized values that was shown up and World War II had just ended.

My country Germany had brought unimaginable suffering on Europe and the world. The victors and defeated could easily have remained irreconcilable for many years. But instead, Europe overcame centuries over conflicts. A peaceful order based on common values rather than supposed national strength emerged.

Despite all the discussions and contemporary setbacks, I firmly believed that we Europeans have united for the better. And the relationship between Germans and Americans too demonstrates former wartime enemies can become friends.

It w as George C. Marshall, wh o gave a crucial contribution to this for the plan he announced at the commencement ceremony in 1947, in this very place.

The transatlantic partnership based on values such as democracy and human rights, has given us an era of peace and prosperity that has benefited all sides which was lasted for more than 70 years now. And today, it would not be long now before the politicians of my generation are no longer the subject of the exercising leadership program, and at most we would be done within leadership in history.

Harvard class of 2019, your generation would be face with the challenges of the 21 century in the coming decades. You are among those would lead us into the future.

Protectionism and trade conflicts jeopardize free international trade and therefore lost the very foundation of our prosperity. The digital transformation affacts all facets of our lives. Wars and terrorism lead to displacement and forced migration. Climate change poses a threat to our planet’s natural resources. It and the resulting crisis are caused by humans.

Therefore, we can and must do everything humanly possible to master this challenge to humankind. It is still possible, however each and everyone of us must play a part. And I said this with measure also with criticism get better.

I will therefore to do everything in my power to ensure my country Germany will achieve climate neutrality by 2050.

Changes for the better are possible if we tackle them together. If we want to go it alone, we could not achieve much.

The second thought I want to share with you is therefore, more than ever, our way of thinking and actions have to be multilateral rather than unilateral, global rather than national, outward looking rather than isolationist. In short, we have to work together rather than alone.

You dear graduates would have quite different opportunities to do this in future than my generation did. After all, your smart phone probably has considerably more processing power than the copy of the IBM main frame computer manufactured in the Soviet Union, which I was allowed to use for my dissertation in east Germany in 1986.

Today we use artificial intelligence, for example, to search the millions of images for symptoms of diseases in order among other things to better diagnose cancer.

In future, a perceptive robot could help doctors and nurses to focus on the individual needs of patients. We cannot predict today which applications would be possible. However, the opportunities it brings are truly breathtaking.

Class of 2019, how we use these opportunities would be largely up to you as a graduate. You are the ones who will be involved in deciding how our approach to how we work, communicate, get about indeed our entire way of life we develop.

As Federal Chancellor, I often have to ask myself, am I doing the right thing? Am I doing something because it is right, or simply because it’s possible? That is just something you too need to ask yourself.

That's the third thought I wish to share with you today. Are we laying down the rules for technology, or is technology dictating how we act? Do we prioritize people as individuals with human dignity with all the manifests or do we see them as many consumes, data sources, objects of surveillance. These are difficult questions.

I have learned that we can find good answers even to difficult questions if we always try to view the world through the eyes of others. If we respect other people's history, traditions, religions and identity. If we hold fast to our inalienable values and act in accordance with them. And if we don't always act on our first impulses even with pressure to make a slap decision. But instead, take a moment to stop, be still, think, pause. Granted that certainly takes courage.

Above all, it calls for truthfulness in our attitudes towards others. And perhaps most importantly, it calls for us to be honest with ourselves.

What better place to begin to do so than here, in this place where so many young people from all over the world come to learn, research, and discuss the issues of our time under the maxim of truth.

Once again, the answer is walls. Walls in people's mind, walls of ignorance and narrow-mindedness.

They exist between family members, as well as between groups within this society; between people of different skin colors, nations and religions. Walls that keep preventing us from envisioning of the world in which together we want you to live. Whether we manage to do that is up to us.

That's what my fourth thought. For my dear graduates to consider is this, nothing can be taken for granted.

Our individual liberty is not given, democracy is not something we can take for granted. Neither is peace, and neither is persperity. But if we break down the walls that hammer us in, if we step out into the open and have the courage to embrance new beginning, everything is possible.

Walls can collapse, dictatorship can disappear. We can hold global warming, we can eradicate starvation, we can eliminate diseases we can give people especially girls access to education, we can fight the course of displacement and force of migration. We can do all of that.

This is exactly what I said to the Boondas talk, the German Parliment in 2005, in my first policy statement as newly elected Chancellor of the Federal Republic of Germany and the first woman to hold this office.

And I want to use precisely these words to share with you my fifth thought.

In my own life, it was the fall of the Berlin Wall that allowed me almost 30 years ago to step out into the open. A that point, I left my work as the scientist behind me and enter politics. That was exciting and magic time. Just as your life would be exciting and magic. But also experienced moments of doubt and worry. For that time we all knew what lay behind but not what may lay ahead. Perhaps that reflects a little how you too are feeling today, omits all the joy at this occassion.

The sixth thought I also want to share with you is this, the moment when you step out into the open is also a moment a risk taking.

Letting go of the old is part of the new begining. There is no beginning without end, no day without night, no life without death.

Our whole life encounters all the diferences. The space between beginning and ending. It is what lays in between that we call life and experiences.

I believe that time and time again, we need to be prepared to keep bringing in things to an end, in order to feel the magic of new beginning, and to make the most of our opportunities.

That's what I learned as a student, as a scientist, and it is what my experiences now in politics. And who knows what life will bring after my time as a politician. That too is completely open. Only one thing is clear, it would again be something different and something new.

That why I want to leave this wish with you, tear down walls of ignorance and narrow-mindedness, for nothing has to stay as it is.

Take joint action in the interest of the multilateral, global world.

Keep asking yourselves: Am I doing something because it is right, or simply because it’s possible?

Don't forget, that freedom is never something that can be taken for granted.

Surprise yourself with what is possible.

Letting go of the old is part of the new begining.

And above all, nothing can be taken for granted. Everything is possible.